A tour of the new murals in City Hall

You might have heard of the galleries in City Hall, but did you know that there are murals here too?

Over the past few years, we’ve added some wonderful work by local artists to walls throughout the building. You can learn more about the new murals and the artists who created them below. We encourage you to take  a look at the other artworks on display in the City Hall galleries too.

The Mayor’s Office of Arts and Culture commissioned artist Cyrille Conan to create a mural for our office, in Room 802 of City Hall. Previously Cyrille displayed a temporary mural on the 5th floor balcony of Boston City Hall  as part of the City’s Fay Chandler Emerging Artist Exhibition and Awards in 2015.

“When I came to see the wall, it was a lot bigger than I thought it would be. And seeing the office set up with all the cubicles gave me the idea of mimicking them in the mural. The palette is that of a brick city building that can be anywhere in the city. I haven't made anything remotely representational in a while, but it made sense to me. Once I had that established, everything just fell into place.”

Artist Sophia Ainslie brightened up the eighth floor of City Hall with a new mural this past summer. As an extension of her project, she documented the reactions of City employees who walked by, and took photos of them with the mural. 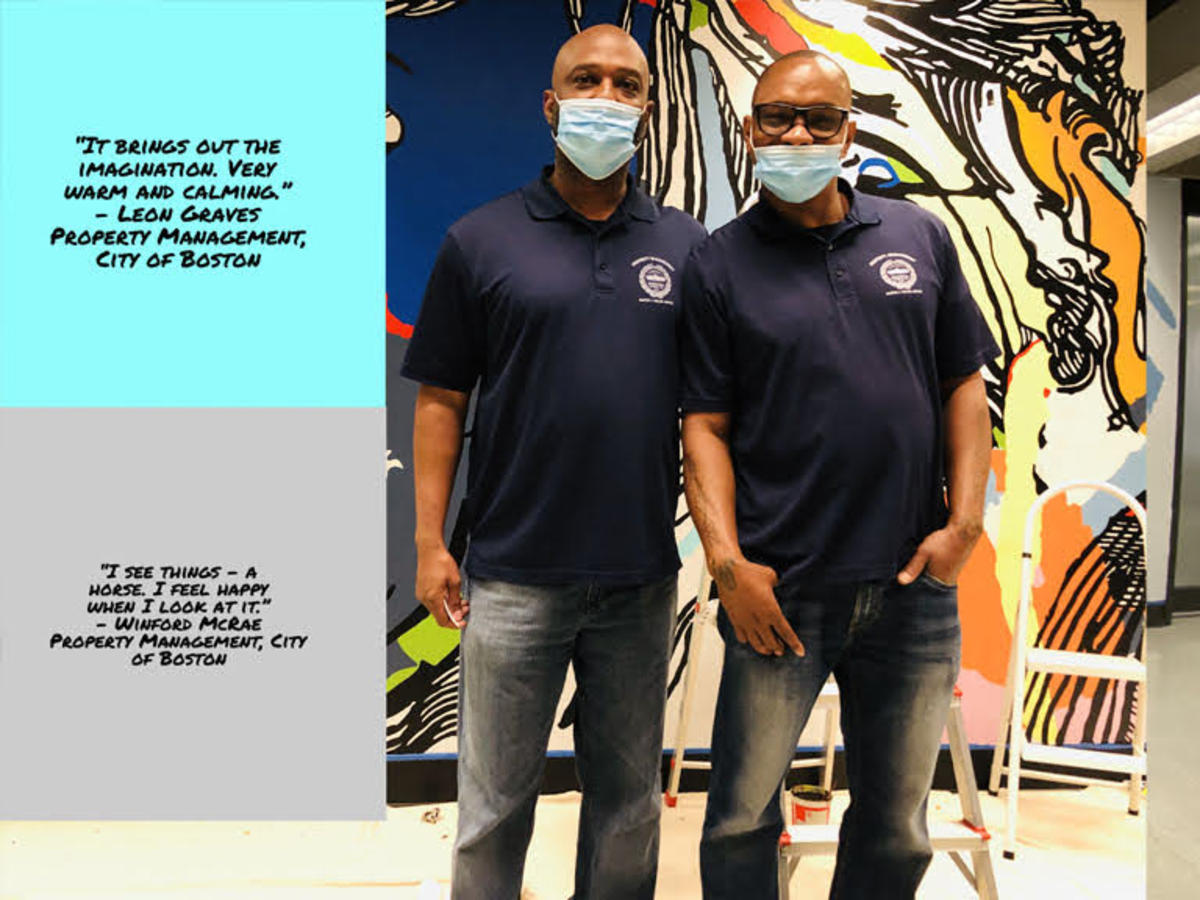 Ainslie works between drawing and painting, and between figuration and abstraction. She melds observation with imagination, resulting in a relationship of connections and disconnections between black mark making and flat color, stillness of shape and active mark, movement and space. She is represented by Gallery Naga. 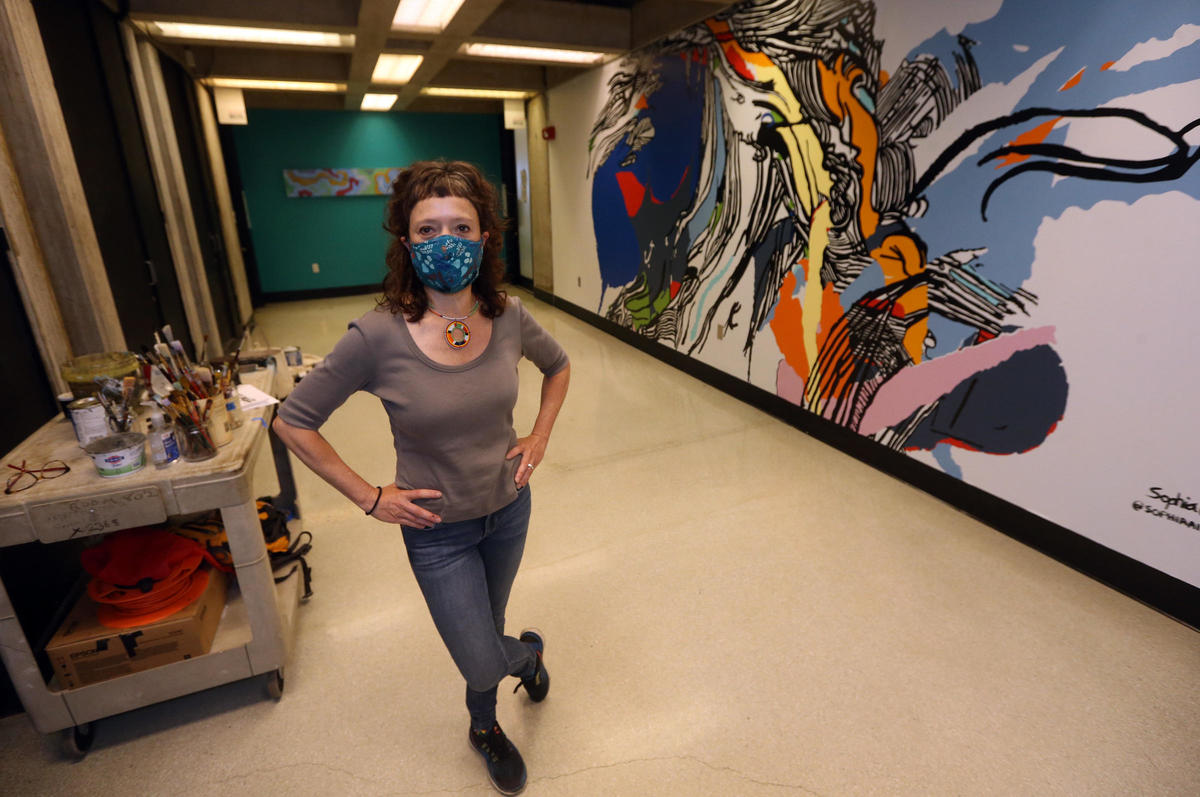 A crowd gathered by Destiny Palmer

This mural by Destiny Palmer is next to the 9th floor elevators in City Hall. Palmer described Labored Bodies as a body of responsive works made after years of research. The work is a response to the revelation of her ancestors being enslaved and freed in South Carolina. Labored bodies is the overarching title for all of the bodies of works exploring this history. This is and continues to be an expansive overview of information about her family, gathered over 5 generations, and its relation to relevant American history. “A crowd gathered” is a painted response to researching American lynching. This body of work responded to the documentation of white fragility in response to Black bodies. 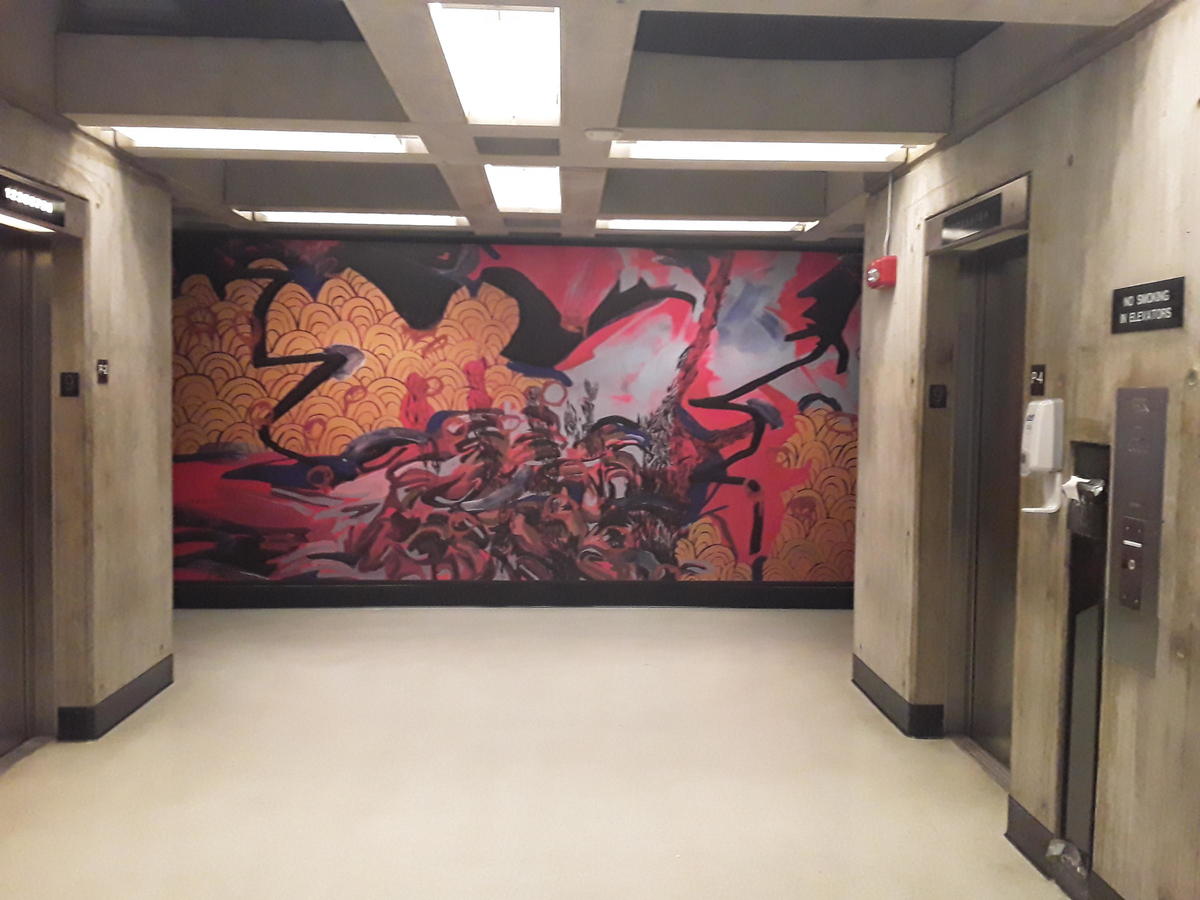 “Within Labored Bodies, I am able to provide clues which mimic the way I was able to access information about my ancestors. This body of work openly deals with the labor that four generations of women have had to endure to provide a space for me to make. This work allows me to continue navigating and negotiating my place in this history as I related to it as an abstract painter.”

The Pareidolia Series is simultaneously an intricate 3D collage piece, a stop-motion puppet, and an animated film project. The mural can be found next to the eighth floor elevators in City Hall.

The film is an abstract narrative exploring the landscape and architecture of the body as a container of memories. Layers of stories, dreams, and memory fragments are interconnected like muscle fibers. The collaged artifact you see is fantastical anatomy made with twisted, interwoven and cut paper to explore these layered subjects. The film uses bleached and distressed film stock, cut-paper puppets, stop-motion sets, hand-drawn animation, and various hybrid techniques.

“Through a re-imagining of family stories and life events, the film attempts to connect my experiences witnessing public cremations in India to my great grandmother’s miraculous survival of a mass killing by Hungarian Nazis along the banks of the Danube in 1944. The word ‘pareidolia’ essentially means to create meaning from randomness--to find the pattern within chaos.”

Maya was named a City of Boston Artist Fellow in 2019. To watch “Pareidolia”scan the QR code below, and you’ll see the collage piece in motion

Artists Lily Xie and Crystal Bi Wegner collaborated with Pao Arts center and Boston Chinatown Neighborhood Center to create this window mural inspired by BCNC Red Oak students. In response to the question “What does your dream Chinatown look like?” students drew fountains to splash around in, roller coasters, and ice cream. Students also drew their hopes for more affordable housing, homeless shelters, and a public library. Completed in 2020, the window mural welcomed children back as they returned to BCNC after its reopening. 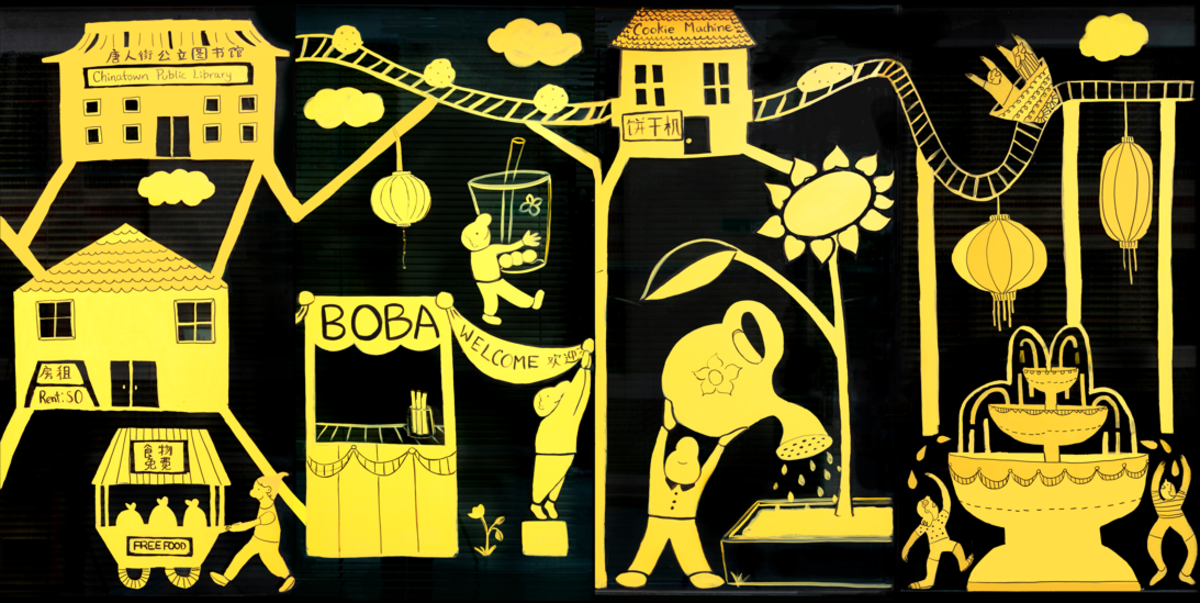 A replica of this mural was commissioned for the wall next to the seventh floor elevators in City Hall.

Crystal Bi Wegner and Lily Xie are co-founders of MOON EATERS Collective, an art and media platform for APIA queer narratives. They were a part of the 2019 Residency in Chinatown, Residence Lab, and co-worked with residents to create the public art installation “A House Shaped Dream”. Currently, they are lead artists for the Chinatown Story Cart project, which received New England Foundation’s 2020 Creative City grant and was supported by the City’s Transformative Public Art Program.