Urban wilds are an essential part of the City's open space system. They play an important role in Boston by lessening the impacts of climate change.

Boston's natural landscape once looked very different than it does today. Salt marshes covered most of East Boston and lined Dorchester's shoreline. Meadows dotted the hilltops of Roxbury. Pristine streams flowed through Hyde Park and West Roxbury. Over time, urbanization and human activity altered Boston's natural landscape. Pieces of these ecosystems still exist throughout the City and offer a glimpse into the natural world. These areas are known as urban wilds.

The City of Boston manages and takes care of 29 urban wilds across our neighborhoods. These urban wilds offer a peaceful break from Boston’s urban environment. They serve as outdoor classrooms for children and adults to learn about nature and provide habitat to native plants and animals. Additionally, urban wilds perform many ecological services, such as:

The goals of the Urban Wilds Initiative are to: 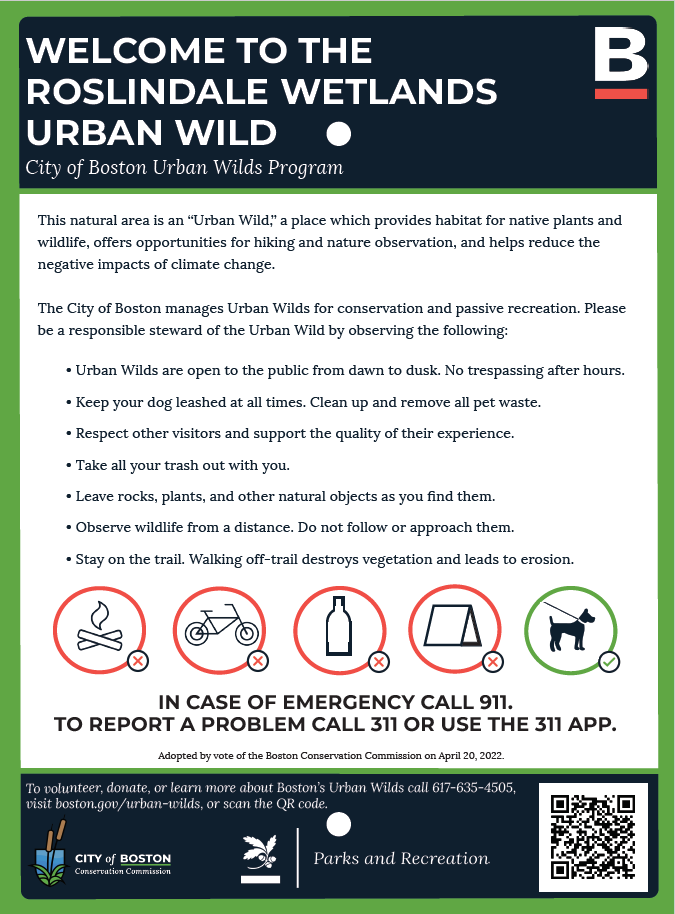 On April 20, 2022, the Boston Conservation Commission, which owns and co-manages most of the city's Urban Wilds, voted to approve rules for the public to use these natural spaces. Please be a responsible steward of the Urban Wilds by observing the following: 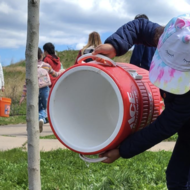 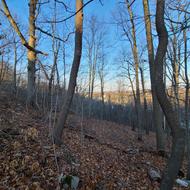 How to get involved

The Boston Urban Wilds Initiative (UWI) has its roots in the environmental movement of the 1970s. In 1976, the Boston Redevelopment Authority (BRA), which is now the Boston Planning & Development Agency (BPDA), published a landmark document called Boston's Urban Wilds: A Natural Area Conservation Program.

This document inventoried 143 areas in the City and offered recommendations for Boston's remaining natural areas. This included both privately- and publicly-owned land.

In response to this report, the Boston Natural Areas Fund (BNAF) was incorporated in 1977 as a nonprofit organization to work with the city and state agencies to secure the inventoried urban wilds. With BNAF assistance, the City acquired more than 48 acres of land. BNAF, in cooperation with the Massachusetts Audubon Society, developed environmental educational programs at several urban wilds to foster understanding and proper use of these sites. Despite heightened concern, accelerated development continued to encroach upon the numerous pristine, unprotected wilds.

In 1990, BNAF issued a second call to arms with an updated urban wilds report documenting the loss of several important sites and stressing the need for increased protection of privately-owned natural areas. To confront stewardship challenges outlined in the report, the Boston Youth Clean-up Corps (BYCC) was enlisted to provide regular clean-up and vegetation control in the summer months while the Parks Department's Maintenance Division supplied some spring and fall support. More recently, neighborhood, corporate, and non-profit groups have also been recruited for clean-ups and special projects.

Despite supervision by the Parks and Recreation Department since 1989, consistent stewardship remains a challenge due to limited resources and/or a lack of grass-roots support. Furthermore, with the exception of properties under Boston Conservation Commission and Parks Department jurisdiction, urban wilds under city and private ownership are continuously threatened by potential development.

Besides the Parks Department and Conservation Commission, the MA Department of Conservation and Recreation (DCR) has also aggressively sought to protect significant parcels of land. Large sites identified in the 1976 BRA report, such as Sawmill Brook (Brook Farm) in West Roxbury and the Belle Isle Marsh Reservation in East Boston, are now owned by the DCR, as are a series of open spaces along the Dorchester shoreline and Neponset River. These acquisitions provide permanent protection to the city's largest and most important remaining habitats.