Santiago joined the City of Boston in 2016 as Deputy Commissioner at the Mayor's Office of Veterans' Services. He is the first Puerto Rican and LGBTQ Veterans' Commissioner in the City's history.

Before joining the Mayor's Office of Veterans' Services, Santiago served 20 years in the Navy in diverse duty stations including sea duty on four warships; and overseas tours in Belgium, Puerto Rico, Panama, and Japan. Santiago participated in Desert Shield/Desert Storm, Eastern Exit, Enduring Freedom, and Iraqi Freedom. His final duty station was in Boston onboard America's Ship of State, the USS Constitution which is the oldest commissioned warship afloat in the world. He retired from military service in 2008 while onboard USS Constitution.

Santiago is on the Executive Board of the Massachusetts Veterans Services Officer Association and is a life member of the Veterans of Foreign Wars and the American Legion. Santiago is also a member of the leadership team for the Homes for the Brave initiative which is part of the Mayors' Challenge to end Veterans' homelessness. He currently resides in Jamaica Plain with his husband, Robert Torres. 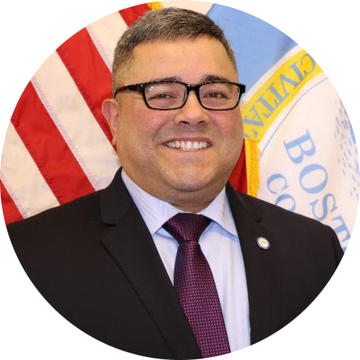 Request Commissioner Santiago for an event or meeting